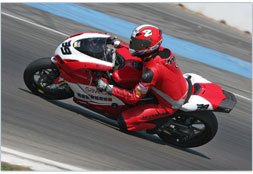 Our consultants don’t just put our customers’ telecommunications solutions in the “pole position”.

Savecall also actively supports motorcycle racing. While our consultants impress with their creativity and competence every day, the Savecall racing team also does its part to uphold that tradition.

We wish the entire team success for the coming season with races in Brünn (CZE), Hockenheim (GER), Salzburgring (AUT) and many more!

Savecall as a sponsoring guest at the Moto GP race at the Sachsenring.

During the MotoGP season, you can hardly complain about a lack of excitement.
Casey Stoner ran a heated head-to-head race. The big four didn’t give each other an inch and gave the many German fans a huge show.

The race began as a spectacular race between four racers: Rossi, Lorenzo, Casey Stoner and Dani Pedrosa, driving three different brands, battled it out on the Sachsenring.

In a private interview, Casey Stoner told the guests that he had to slow down a little in the middle of the race because the grip on his front tire kept slipping and he was almost forced to skid out onto the gravel pit. He dropped back two places and finished the race in fourth place.

You can find pictures of the event here: