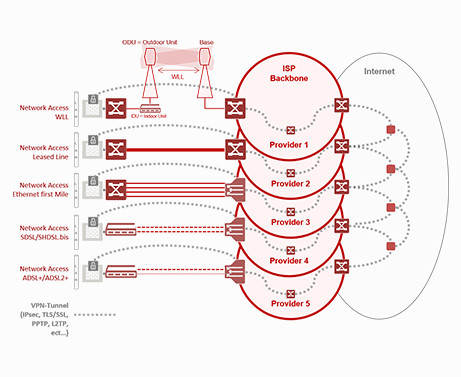 All VPN providers in one place

Benefits of an Internet VPN

Centralization of the IT

Allows the use of central IT services.

The data is encrypted when transmitted via the Internet.

Network Services (VPN) via the Internet

Virtual Private Netwoks (VPN) allow branch offices, home offices or external employees to connect to the central office via the Internet. It is the lowest-cost option for Network Services.

The primary reason for the use of VPN services is the use of a central IT infrastructure.

This is a logical network which is implemented on a publicly accessible network infrastructure (Internet). There are two principle variants.

The professional alternative to an Internet VPN is an MPLS network. This is a network that is managed by the provider that does not run via the public Internet.

A VPN is technically implemented using different protocols. The most common protocols are IPsec and SSL

IPSec or SSL? One aspect of security is the question as to which protocol, IPSec or SSL, the  VPN solution should use. Both variants are now considered “equally secure”, however, IPSec has a longer proven track record and is often already otherwise anchored in the company’s IT. In contrast to that, SSL-based solutions score points due to greater flexibility and easier administration.

A slight trend with regard to the use of the protocols can be seen: IPSec is often preferred when connecting entire branch offices, while SSL is more effective for connecting individual people.

In comparison to an MPLS VPN, operating an Internet VPN does not require a provider. A VPN can be set up on any Internet line using a VPN router. This can be implemented by the in-house IT department or by a systems company.

In comparison to MPLS networks, the costs are low. The reason for this is the fact that the lines are not dedicated. I.e. the VPN is implemented via conventional Internet lines. In addition, there are one-time costs for a VPN-capable firewall and, if necessary, its maintenance.

Also take a look at my Blog!

Any cookies that may not be particularly necessary for the website to function and is used specifically to collect user personal data via analytics, ads, other embedded contents are termed as non-necessary cookies. It is mandatory to procure user consent prior to running these cookies on your website.